Moscow is the capital and the largest city of Russia. It is included in the 10 most numerous cities in the world.
Moscow is a hero city, the center of business, politics, finance, etc.
But that is not all. 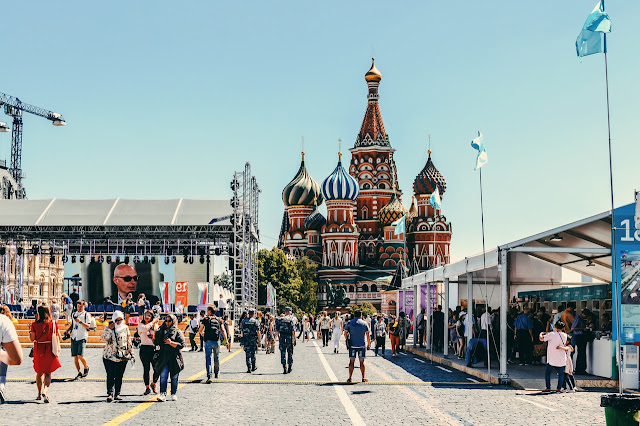 The city received title from the name of the river - Moscow River  - around which it was built
There are several unofficial titles - “Belokamennaya”, “Zlatoglavaya”, “Pervoprestolnaya”, “Port of the Five Seas”, “Third Rome”.
In 1147, the name of the city first appeared. Now every first Saturday of September, residents of the capital celebrate the birthday of the city. This year Moscow is 872 years old.
Moscow is a big metropolis. 12.5 million people live in it (and this is only official!). Every day 3 million tourists come to the capital.

Residents of Moscow are called 'moskvichi' and 'moskvichki' (muscovites).
There are several types of transport in Moscow - urban (buses, trolleybuses, trams) and personal (cars).
The most popular and convenient transport is the metro, or subway.
Metro appeared in Moscow in 1935, although construction was already being discussed at the end of the 19th century. Today the Moscow Metro has 15 lines, 230 stations and more than 10 thousand trains every day. And exact amount of people who use the subway every day - it's impossible to say for sure.
The most inconvenient form of transport is a car, due to the large number of traffic jams.
There are 4 international airports in Moscow (Sheremetyevo, Domodedovo, Vnukovo, Zhukovsky) and 9 railway stations.
Muscovites are great theatergoers. The first public theater was created on Red Square on the orders of Tsar Peter I.
Today there are about 200 theaters in Moscow, and the oldest is the Maly Theater.
There are many parks in Moscow and the oldest parks - Alexander Park (near the Kremlin), Neskuchny Garden and Hermitage Park.
If you want to go through all the streets of Moscow, then you will need to walk more than 5,000 kilometers (this distance can be covered in 36 days).
The central, famous and most expensive street of the city is Tverskaya. In Soviet times, this street was expanded, the oldest and most beautiful houses were transported on rails.
By 2013, the territory of Moscow increased by 2.4 times. And by 2020, the Moscow government promises to build 75 new metro stations.
There is  there is only one monument to Emperor Peter I in Moscow (this monument has a very unusual story), although the emperor himself did not like this city.
There are many architectural styles in Moscow. People who love the capital believe this shows the diversity of life in the city. People who do not like the capital believe that this only spoils the old image of the city.
The first high-rise buildings in the capital appeared in the USSR. The most famous are 7 Stalin's skyscrapers (including the main building of Moscow State University). It is known that at first they wanted to build 9 such skyscrapers.
In 1980, the Summer Olympic Games were held in Moscow. The mascot of the Olympics was the Olympic Bear.

After 38 years, the FIFA World Cup was held in Moscow. And the mascot was Zabivaka.