In Russia and in some post-Soviet republics, Victory Day is celebrated on May 9 since 1945.
The Act of unconditional surrender of Germany was signed on 8 May at 22 hours 43 minutes (in Moscow it was already May 9 at 0:43). 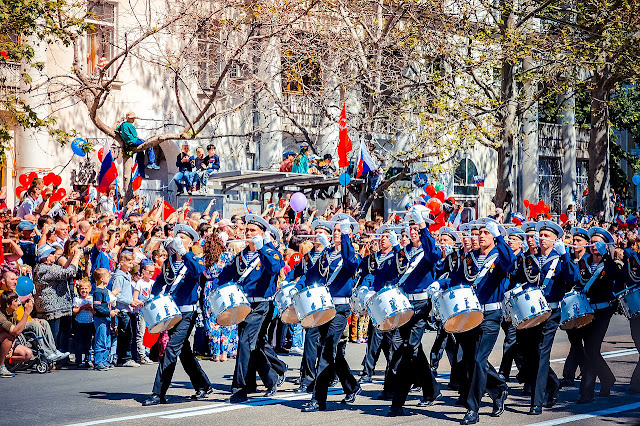 On May 9, 1945, Joseph Stalin made a speech on the radio, in which he congratulated the Soviet people with victory in the Great Patriotic War. Here is a small excerpt from his speech:
"Comrades! The Great Patriotic War ended with our complete Victory! The war period in Europe ended. A period of peaceful development began.
With the Victory you, my dear compatriots and compatriots!
Glory to our heroic Red Army, who defended the independence of our Motherland and won victory over the enemy!
Glory to our great people, the victorious people!
Eternal glory to the heroes who fell in battles with the enemy and gave their lives for the freedom and happiness of our people!"

After Stalin's speech, people went to the centers of cities and congratulated each other with the Victory! It was the happiest and long-awaited day for all. There was no parade on this day. The soldiers have not returned from the front yet. But everyone was happy.

The first military parade on Red Square was held on June 24 in 1945. The next parade took place only 20 years later in 1965 and after it was passed almost every year on May 9 in Hero cities.
It's difficult to get to the parade itself now, but the rehearsals can be seen a few days before the parade.
Every year, soldiers of various troops, military equipment (old and modern) and aircraft equipment (sometimes they cancel flights of airplanes due to bad weather) take part in the parade through Red Square.
Victory Parade 2021 you can watch online ↙

After the parade, people lay flowers - usually carnations - to the Tomb of the Unknown Soldier (in Moscow), to monuments of glory and military valor, to memorials. Everyone congratulate veterans, participants of the Great Patriotic War. 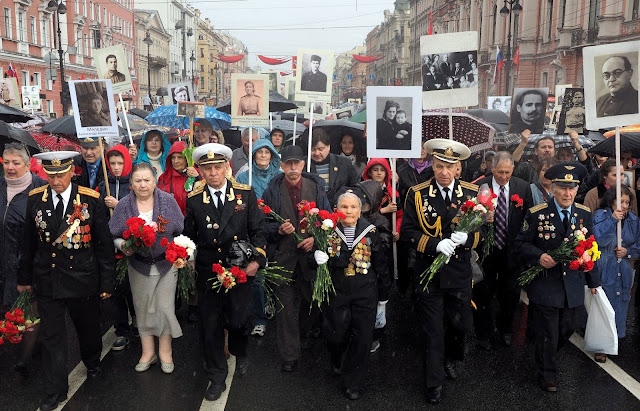 Since 2012, a new tradition (or a new parade)is hold - the action "Immortal Regiment", in which people carry portraits of their relatives, grandfathers and great-grandfathers.
The action "Immortal regiment" appeared in Tomsk. Every year new cities and countries take part in this action. Participants in the action carry portraits of their relatives who fought, were in the rear, were captured or were born during World War II. All this symbolizes the participation of those in the parade on Victory Day. Today, the action "Immortal Regiment" already takes place in 80 countries, anyone can take part in it.

Another important symbol is the St. George ribbon. A few days before the holiday the symbol is given to eneryone on the streets of cities not only in Russia, but all over the world. 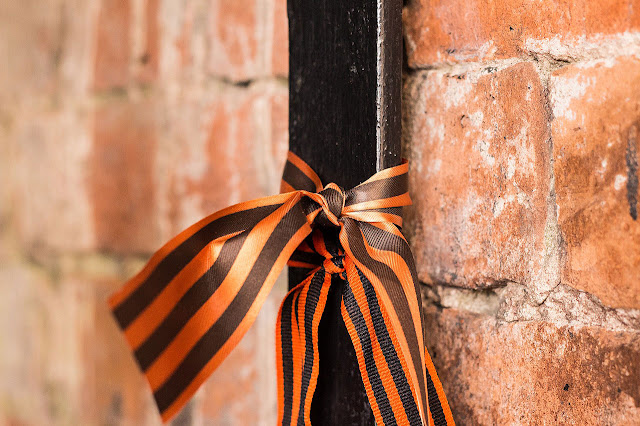 There is one more tradition -  a Minute of Silence at 7 pm (TV and radio broadcast) - a tribute to the memory of those who perished during the Great Patriotic War. Before a moment of silence, the announcer reads military verses and remembers the dead in the war.

The day ends with a festive salute (fireworks) at 22 o'clock.